Is The Orgasm Gap Real?

The Orgasm Gap is a statistical disparity in orgasm frequency between partners having heterosexual sex.

Pop culture scripts about sexuality tell us: 1) that men should be the initiators, 2) that orgasm only happens through penetrative sex, and 3) that sex ends when a man climaxes.

Communication is key to closing the Orgasm Gap. Check out our suggested scripts to get the conversation started!

What is the Orgasm Gap?

Orgasms have been shown to reduce stress and anxiety levels, boost immunity, and increase self-esteem  — all while triggering a rush of feel good hormones throughout the body. And yet, not everyone is getting them equally.

According to recent studies, there is a statistical disparity in orgasm frequency between partners having heterosexual sex. What does that mean? Women aren’t climaxing nearly as often as men. For every 100 times a heterosexual couple has sex, the man will orgasm 95 times, and the woman will orgasm 65 times. This means that straight men are experiencing 35% more orgasms than straight women are.

Having an orgasm is only one metric by which we measure pleasure. Not orgasming, or having difficulty orgasming is nothing to be ashamed of. Although orgasms are not a requirement for enjoyable sex, there’s no question that your desire should be prioritized by your partner during sex.

O.school believes that everyone should have equal access to pleasure. Working to close the Orgasm Gap is one way to address sexual inequality. By engaging with the material on this page, you’re joining us in building a Pleasure Culture.‍

Content Disclaimer: We recognize that people of all sexual orientations and gender identities can experience differences in orgasm frequency with their partners. However, the Orgasm Gap generally refers to orgasm inequality between heterosexual, cisgender (not trans) men and women. For the purpose of this course, the terms “man” and “woman” refer to these heterosexual, cisgender men and women. We hope there is deeper scientific inquiry in the future about how sexual scripts impact people based upon race, class, age, ability, and how the Orgasm Gap differs based upon identity and lived experience.

What causes the Orgasm Gap?

There is no single cause for the Orgasm Gap. A complex combination of biological and cultural factors impact the ways we experience sex. Sexual education is one of the ways people can become informed about sex and their bodies, but as of 2018, only 13 states in America require that the sex ed taught in schools be medically accurate. This means many young people are growing up with misinformation about sex, and are unaware of basic anatomical features in their bodies and their partners’ bodies.

Pop culture representations of sexuality also influence how men and women have sex. These scripts typically tell us that men should be the initiators, that women only orgasm through penetrative sex, that sex ends with a man climaxes, or that women should fake an orgasm to be polite. Although quite common, these scripts have been influenced by pervasive sexual stereotypes, and have no factual basis.

In addition to a lack of sex ed and problematic sexual representation, many people also have experienced physical and/or psychological trauma. There are many ways that trauma can impact how people engage in both solo or partnered sexual activity. A history of abuse or trauma can cause feelings of shame, low self-esteem, and can make it difficult to want to connect sexually for fear of triggering painful memories or feelings.

All of these factors add up to create what we now call the Orgasm Gap.

Who Does the Orgasm Gap Impact?

Heterosexual women bear the brunt of the Orgasm Gap, although other people do experience different rates of orgasm than their partners.

Some might try to explain away the Orgasm Gap by saying that women orgasm less than men because they are physically or psychologically more complicated or just can’t climax as easily, but these statistics prove otherwise. If women orgasm 86% of the time during sex with women and women only orgasm 65% of the time during sex with men, this large statistical difference means the Orgasm Gap is caused by a lack of communication and limited anatomical awareness between men and women in the bedroom.

*For more information on cisgender female anatomy, check out our Clitoris course!

In one study that used a sample of 600 college students, evolutionary biologists at the Kinsey Institute at Indiana University and Binghamton University found that women were twice as likely to climax from penetrative sex or oral sex in serious relationships than they were during hookups.

The Orgasm Gap that exists between serious relationships and hookups does not mean that commitment guarantees better sex. Instead, it suggests that women in serious relationships are better able to communicate their desires to their sexual partner, and that their sexual partner is more invested in their pleasure. However, there is no magic button that guarantees an orgasm, nor is having an orgasm a requirement for satisfying sex.

Why Does the Orgasm Gap Matter?

At O.school, we believe that the Orgasm Gap prevents full bedroom equality in the same way that the Wage Gap prevents full workplace equality. Paula England, Professor of Sociology at Stanford University suggests that, “The orgasm gap is an inequity that’s as serious as the pay gap, and it’s producing a rampant culture of sexual asymmetry.”

When women are not paid the same as men are for the same work, their work is devalued, and when women do not receive the same pleasure as men do for the same sexual interaction, their pleasure is devalued. Although a woman’s orgasm might not seem as important as a woman’s salary, both can be tools of empowerment and fulfillment. There are a variety of factors that might not make it possible to reach pleasure parity in every situation, but the goal for sexual equality should nevertheless be in place. No one is more or less worthy of care and respect, inside the bedroom or out.

The orgasm gap is an inequity that’s as serious as the pay gap, and it’s producing a rampant culture of sexual asymmetry. — Paula England, professor of sociology, Stanford University

The Orgasm Gap has been depicted in movies and on television long before it even had a name. Conversations about women “faking it” to “get through” sex have been featured famously in When Harry Met Sally and Seinfeld, and comedians like Amy Schumer have touched on the subject as well. When women are shown orgasming in Hollywood films, it’s usually from penetrative sex alone. According to an analysis of 33 orgasm studies by Elisabeth Lloyd in her book, The Case of the Female Orgasm, only 25% of women orgasm consistently from penetrative sex. This means that depictions of women climaxing on screen that so many of us see growing up are grossly inaccurate representations of how women actually come in real life. No wonder the Orgasm Gap exists!

I demand that I climax. I think women should demand that.  — Nicki Minaj

How can we begin to close the Orgasm Gap and instead build a Pleasure Culture? Sexual education is a great place to start to help build a more sex positive society. Once you’re out of high school, sex ed becomes self-education, and prioritizing your own individual pleasure as a method of self-care is crucial in this process. But first, you have to communicate your needs.

Remember to allow yourself real pleasure, and not worry about how long it takes. — Amy Poehler

Communication Skills: How Can You Advocate For Your Orgasm?

Communication is key to closing the Orgasm Gap, and advocating for your own pleasure can be a powerful thing. It’s always a good idea to talk about sex in a neutral place outside the bedroom, and before any sexual activity starts to take place. That way, the stakes are lower, and it’s easier to feel more comfortable speaking your mind. If you’re not used to speaking up or even thinking about your sex life as something you can work on, try out these simple scripts to get the ball rolling. And if talking face to face makes you feel too anxious, you can always text or email. These scripts are only suggestions. Try mixing and matching them in whatever way works best for you to help break the ice and open up a dialogue with your partner about pleasure. 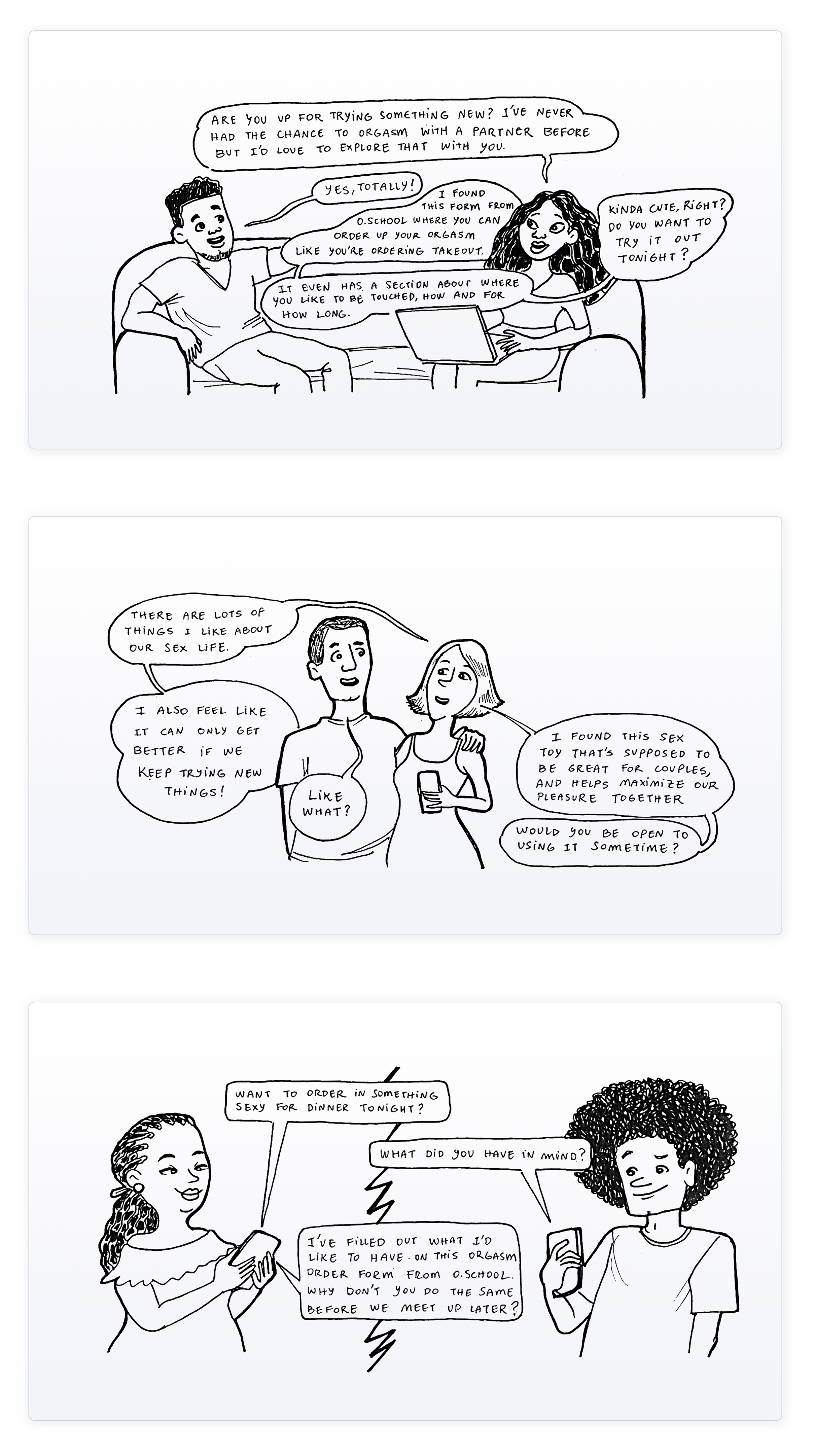 Closing the Orgasm Gap may seem difficult on a large scale level, but educating yourself, your partner, and even your friend group is an important first step. If you are a woman who has heterosexual sex, talk to other women about your own experiences with orgasm during sex, and about the ways you see pleasure represented on TV and in movies. Talk with your heterosexual male friends and partners about the same things. And, most importantly, talk with your heterosexual male partners about how you each experience orgasm during sex. The first step to closing the Orgasm Gap may be education, but the second crucial step is communication, and the more we can raise awareness about sexual inequality and get comfortable speaking up about it, the more we can work towards building a culture of pleasure parity.

At O.school, we know that few things are one-size-fits-all. Read on for insights from Pleasure Professionals and other experts:

"Reaching orgasm can be hard with shame around your sexuality or body. Past traumatic experiences can also make it difficult. If you feel that these things are holding you back, you may consider talking to a therapist."

"As children get older, the conversation shifts from just accepting the fact that they’ll explore genitals, to letting them know that it’s ok to do so, and that it’s worthwhile to know what satisfies their own body."

Have you ever heard of the orgasm gap? No? Well, let me explain.

Meet Sam. Sam is a straight woman. Sam is dating Quinn. Quinn is a straight male. According to a recent study, as a heterosexual couple, if Sam and Quinn have sex 100 times, Quinn will reach orgasm 95 times, Sam will only reach orgasm 65 times. You've heard of the wage gap, right? This phenomenon is known as the orgasm gap.

Does this mean that queer people are just born pleasure wizards? Probably not. It's likely due to a number of different factors. We're all shown the same sexual script. In movies, books, and interactions with people. Most of these scripts are telling us what heterosexual sex looks like. So queer people are having to figure it out on their own by having conversations with their partners about pleasure and writing their own scripts.

We believe that sexual communication and education can close the orgasm gap. So here are three questions to help you start a conversation. Question number one. Do I feel safe saying no? This question is crucial to making sure that you're having fully consensual sex with your partner. You should also feel excited to say yes. Question number two. Is my pleasure as important as my partner's? Maybe they'll ask what do you like in bed? Or maybe they'll make sure that you orgasm first before they do. Question number three. Does sex end when my partner does? If your partner is pleased and isn't down to please you, then that warrants a conversation about mutual pleasure. Thanks for tuning in and remember to do your part to close the orgasm gap. Whether that's holding space for someone else's pleasure or holding space for your own.

“Differences in Orgasm Frequency Among Gay, Lesbian, Bisexual and Heterosexual Men and Women in A National U.S. Sample,” Archives of Sexual Behavior, 2018.

“Differences in Orgasm Frequency Among Gay, Lesbian, Bisexual and Heterosexual Men and Women in A National U.S. Sample,” Archives of Sexual Behavior, 2018.

The Case of the Female Orgasm, Harvard University Press, 2006. 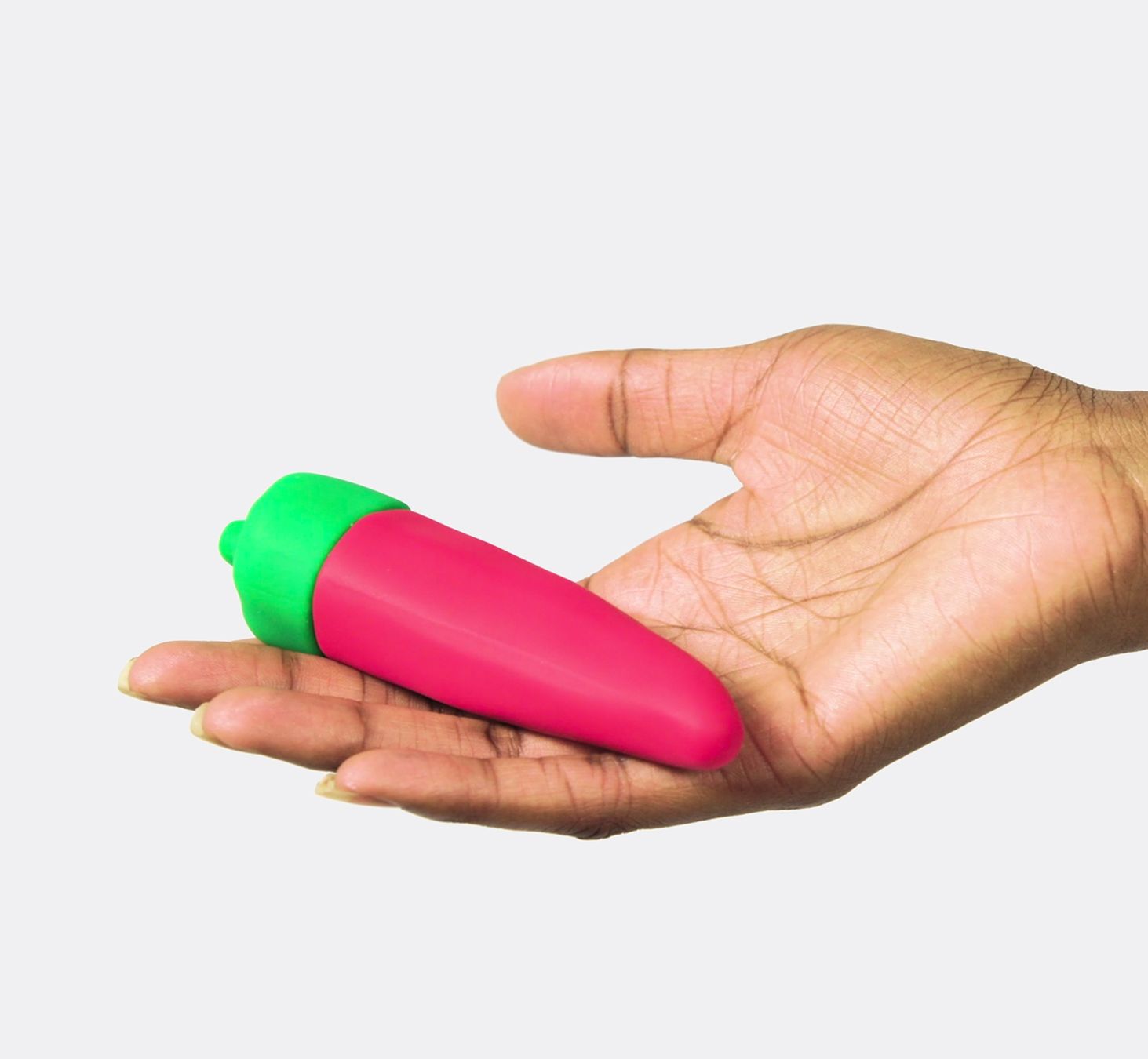 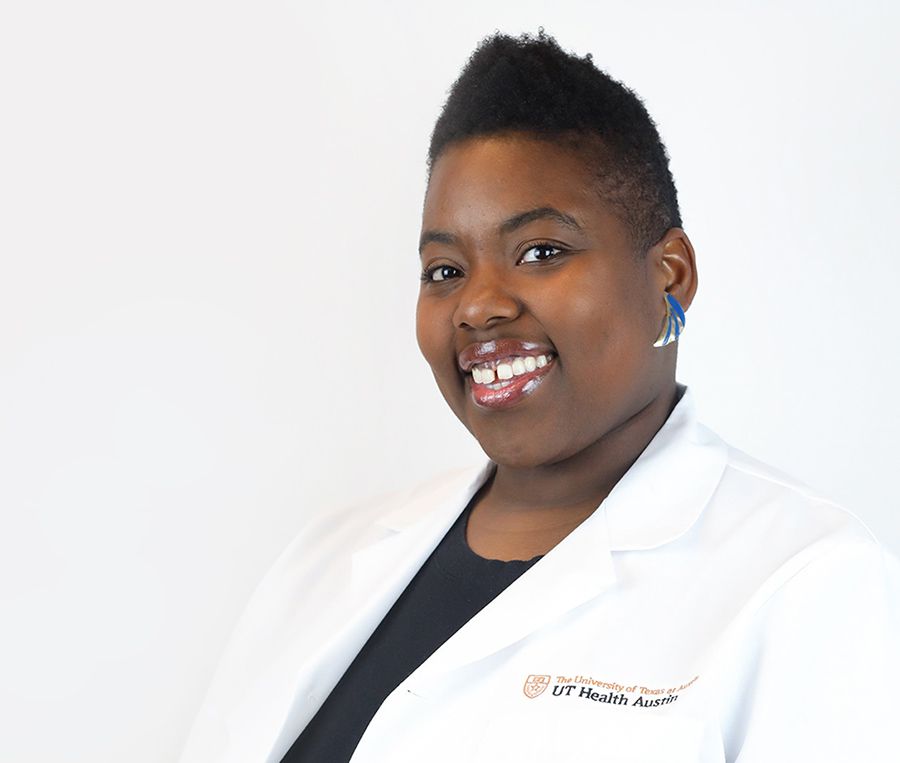 How To Clean Sex Toys 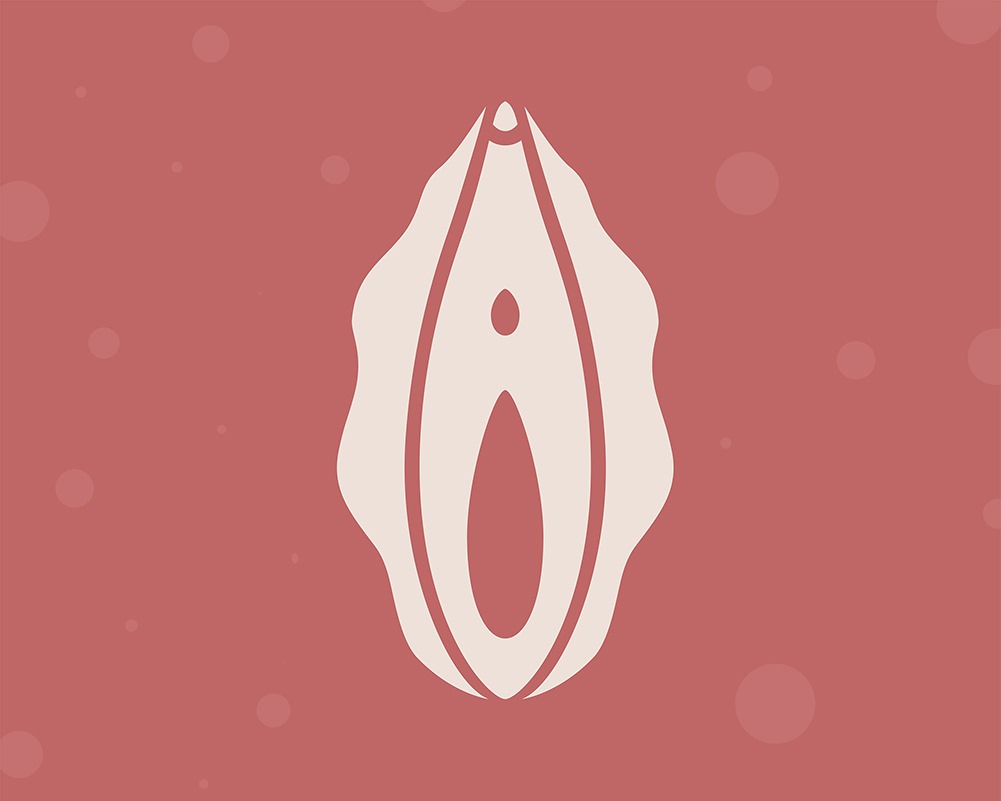 How To Find The Clit